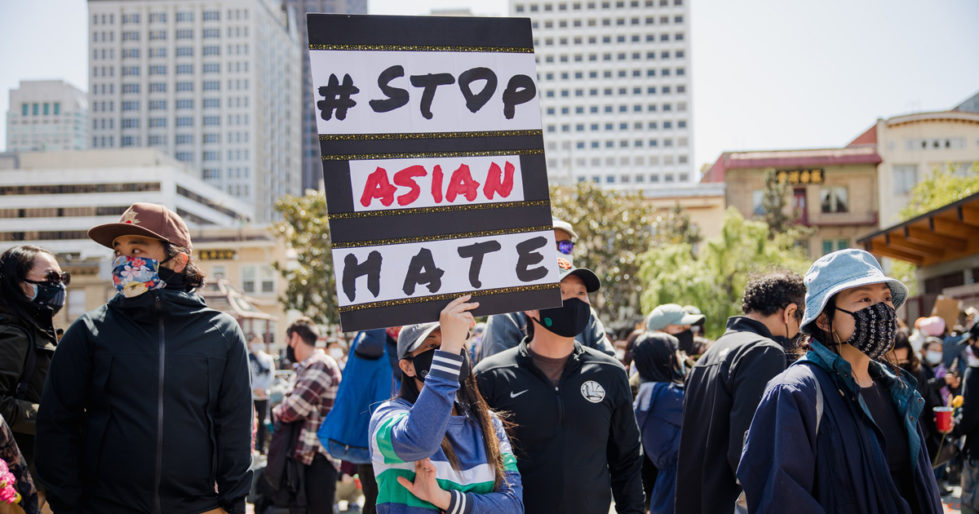 As we move through Holy Week, we do so solemnly and with many reasons to lament.

In addition to grieving all of the losses associated with COVID-19, we are also grieving alongside our Asian sisters and brothers over the murders in Atlanta, GA; all other expressions of anti-Asian racism; and the lost sense of safety that accompanies them.

This year, reported incidents of anti-Asian hate crimes have increased 717% in Vancouver, where Sanctuary is located, with similar increases observed elsewhere in North America. While violence against Asian people has surged during the pandemic, its roots long predate it.

These stats take on flesh when they are reflected in the experiences of loved ones. We might hear a friend mention that he advised his elderly Chinese mother to “dress more white” in order to avoid being victimized. We might hear a coworker say she feels less safe going out alone.

At Sanctuary, we recognize that historic and systemic oppression, as well as overt racism, lead to racial trauma and other mental health challenges, and we want our Asian sisters and brothers to know that we see you, we hear you, and we are with you. As an organization which promotes mental health and wellbeing, we recognize the impact of racism and condemn and denounce racism in all its forms, and we celebrate and acknowledge the dignity, worth, and value of all people made in the image of God. We also want to celebrate Asian cultures, protect Asian communities, support Asian businesses, and recognize Asian accomplishments. As an organization, we are thankful for the tremendous contributions of our Asian staff members, and we celebrate their perspectives, gifts, talents, and leadership.

In response to recent events, and acknowledging the historical racism experienced by Asian peoples, here are some resources our team has collected which may support you in caring for your own mental health, educating yourself, and becoming a better ally.

We have also chosen to make a donation to The Canadian Anti-racism Network, and we encourage you to consider making a donation to this charity or another of your choosing that is working to bring an end to racial injustice.

Click on each header to open a drop-down menu of resources in that category.

As the daughter of Korean immigrants, Cathy Park Hong grew up steeped in shame, suspicion, and melancholy. She would later understand that these “minor feelings” occur when American optimism contradicts your own reality—when you believe the lies you’re told about your own racial identity.

Raise Your Voice: Why We Stay Silent and How to Speak Up by Kathy Khang

Power dynamics keep us silent and marginalized, especially when race, ethnicity, and gender are factors. What can we do about it? Activist Kathy Khang roots our voice and identity in the image of God. Because God created us in our ethnicity and gender, our voice is uniquely expressed through the totality of who we are. We are created to speak, and we can both speak up for ourselves and speak out on behalf of others.

Embracing the Other: The Transformative Spirit of Love by Grace Ji-Sun Kim

We live in a time of great racial strife and global conflict. How do we work toward healing, reconciliation, and justice among all people, regardless of race or gender? In Embracing the Other Grace Ji-Sun Kim demonstrates that it is possible only through God’s Spirit.

Race and Place reveals the profound ways in which these geographic forces and structures sustain the divisions among us. Urban missiologist David Leong, who resides in one of the most diverse neighborhoods in America, unpacks the systemic challenges that are rarely addressed in the conversation about racial justice.

Soong-Chan Rah’s prophetic exposition of the book of Lamentations provides a biblical and theological lens for examining the Church’s relationship with a suffering world. It critiques our success-centered triumphalism and calls us to repent of our hubris. And it opens up new ways to encounter the other.

The Jade Peony by Wayson Choy

Told through from the perspective of three immigrant children’s remembrances, this novel takes place in Vancouver’s Chinatown of the 30s and 40s and deals with the theme of cultural adaptation/assimilation.

This young adult novel chronicles Canada’s persecution and internment of Japanese Canadians during WW2 from the perspective of a young child.

A memoir recounting the true story of the author’s grandparents. His paternal grandmother was one of many Japanese Canadians forced into internment camps while his maternal grandfather was a prisoner in Japan during the Second World War. The author’s existence is testament to the deep forgiveness embraced by the two families.

Voices of the Pandemic Podcast
This is a six-part podcast series hosted by former award-winning broadcast journalist Calvin To. Ever since the COVID-19 pandemic arrived in Canada, there has been a surge in anti-Asian racism across the country. In this podcast, you will hear the stories from the people who have experienced it first-hand.

AAPI Women Lead aims to strengthen AAPI communities and to end the intersections of violence against and within these communities through the leadership of women and girls.

The Asian Mental Health Collective aims to normalize and destigmatize mental health within the Asian community and provides an Asian Canadian Therapist Directory as well as this North American directory.

The Asian Mental Health Project (AMHP) provides resources that are accessible to all and dispel the belief that struggling with mental health is a choice or a sign of weakness.

The Eastgate Project, by Sanctuary Advisor Dr. Edward Ng, offers podcasts and blog posts that focus on the intersections of psychology, theology, and the experiences of the Asian diaspora. “The Bitter Fruit of Fetishism” explores the recent murders through the lens of fetishism.

Anti-Asian Violence Resources is a one stop site that provides links to educational, allyship, mental health, and other resources.

Hollaback offers Bystander Intervention Training as well as Resources for responding to harassment so that everyone has tools to respond to, prevent, and intervene in instances of harassment.

Despite professed ideals and incremental progress, racism persists as a powerful, deeply entrenched social reality. Lay a theological foundation for confronting the chief forms of racism from a Christian perspective. Examine the status of “races,” trace the history of racism in modern societies, and analyze case studies in light of a biblical vision of humanity, righteousness, justice, and love. Learn to come alongside, honor, and learn from minoritized others, as well as address concrete manifestations of racism. If you are seeking to be a well-informed, self-aware, anti-racist follower of Jesus, this class is for you.

Recovering Hope, a five day devotional on the intersection of race, mental health, and faith, was created by Tiffany Bluhm in partnership with Sanctuary.

SafeBuddies is a program by BOLT Safety Society. In response to anti-Asian hate crimes in Vancouver, volunteers will escort seniors and women home.

A five-hour film series exploring US history and the ongoing role Asian Americans have played in shaping it.

Examine the origin, history and impact of the 1882 law that made it illegal for Chinese workers to come to America and for Chinese nationals already here ever to become U.S. citizens. The first in a long line of acts targeting the Chinese for exclusion, it remained in force for more than 60 years.

As a Canadian-based organization, we also want to acknowledge the injustices faced by Indigenous peoples in our country. We support the dignity and rights of these communities and reject hatred and racism of all kinds.