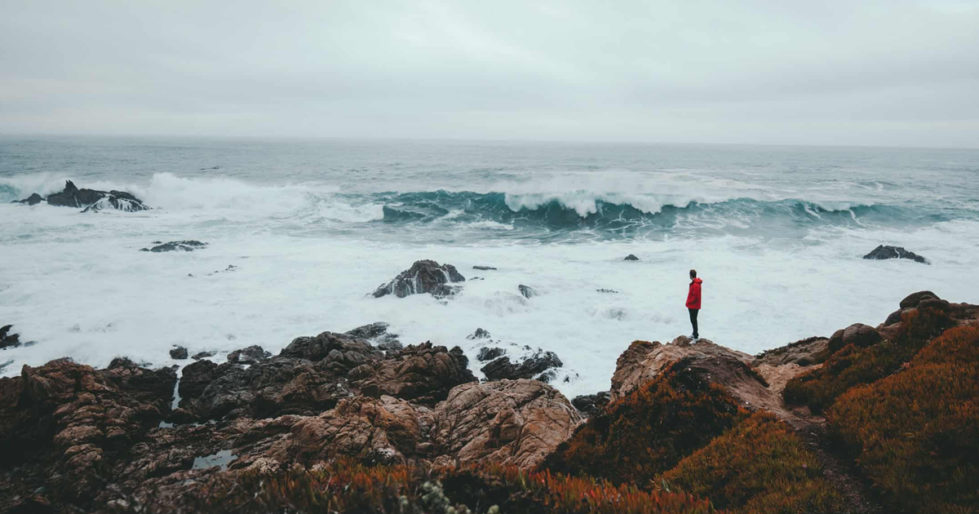 An illustration can often be an effective way to capture the essence of an experience, allowing the reader to apply it to their own life while gaining deeper insight along the way. As I outline my journey through challenging waters, I hope the following sketch is splashed with the colours and shapes of your experience, creating an illustration that speaks to your own voyage or the voyages of those close to you. This journey of mine may be compared to paddling along a coastline in a small self-propelled dingy. Sometimes the journey has been smooth and beautiful; other times the sea has been rough and the currents have been strong. In these turbulent moments, I have been tossed around and battered by the waves.

While I toiled on this voyage, my mind began reacting to stresses in my life in new ways. I cannot say my knowledge of the mind is anywhere near complete, but this mysterious piece of anatomy that is created to be capable of so much has a fragile side. Regardless of whether I attribute it to internal struggle, external stressors, or chemical imbalance, fragility began to express itself gradually and subtly in the form of anxiety and mild depression. I thought this was regular, supposing everyone around me also had these discouraging thoughts as they matured. As the seasons went by, my mind continued to express itself in ways that I assumed were normal, so I kept these thoughts to myself.

I gradually built up a tolerance to the kind of damaging, unrealistic thoughts I was having. As the severity increased, the thoughts I would have considered to be unhealthy or strange a few seasons before turned into my new reality. Self-propulsion was the primary way I knew, so I pushed on in my voyage despite the exhaustion that began to set in with each new storm. As I continued to be pulled out to sea, I kept telling myself the storm would let up, but it did not. Eventually reaching a point of exhaustion, I floated further from the shore. I started giving up hope that I would ever be free from the tumultuous storm around me and inside me, and with that came shame and resentment. I resented God for what I perceived to be his abandonment of me, while feeling ashamed of my inability to push on and ashamed of my conclusion that God had abandoned me. I had floated so far from shore that I had lost hope in myself and in Jesus.

The stresses in my life eventually reached a breaking point while I was travelling for several months. During this time, my regular patterns of life were disrupted, and I was confronted with physical illness as well as mental illness. I could no longer trust myself, nor (in my mind) could I trust my situation to friends, family, or even God. All I wanted to do was hide out of shame, self-pity, and disappointment. The mental exhaustion that had been weighing me down for years finally overpowered my presumption that I could do it myself.

Upon my return from travelling, reclusion became a regular pattern. This made all motions leading to a healthier state more challenging. I hid from what I knew. Isolation, which I believed to be my friend, became a very real enemy. The stresses of life grew larger than I could handle, I was back in my dingy but this time I had my eyes closed out of fear and shame. I could hear the crashing and feel the spray, and it made the waves seem even larger. I was not paddling to safety, but blindly flailing around, getting pulled further and further into the turmoil. I had abandoned a purposeful direction, abandoned hope, abandoned God.

Loved ones around me realized I was in desperate trouble – a trouble that would not lighten or soon pass, but only seemed to worsen. Back in the illustration, rescuers were being sent out. At first they did not venture far enough into the storm because it seemed improbable for me to be so far out at sea. Eventually, as the rescue expanded, I was spotted and dragged aboard a vessel. This expanded rescue involved loving conversations, consultation with medical professionals, and patience with my mental state.

With the assistance of those around me, and from the safety of the vessel, I eventually began opening my eyes to the reality of my situation. Hope was slowly restored as I released my iron grip on pride and shame. My eyes were no longer blinded by fear and I saw a new course for my life. This course relied on trusting others around me and trusting in Jesus. By setting off along this new course, I was able to begin to understand the love and compassion that Jesus and others had shown me during the chaos.

This season of exhaustion and blindness led to new insight into the nature of Jesus. He ventured out into the sea to provide a lifeline. Not only was Jesus clearly there in the moment of rescue, dragging me aboard the vessel, but Jesus was also there (in a less clear way) throughout the storm. I cannot say I presently understand how or where Jesus was in the midst of my turmoil and resentment towards him, but I do know that he was close enough to patiently keep me afloat even when I was not listening or looking for him. Christ’s action came in a moment when I had clearly become too weary to propel myself. In my case, the lifeline of Jesus did not come in the form of a booming voice or vision; it came in the strong, comforting grip of a Father reaching out to his son and pulling him out of the waves.

In the years since Jesus pulled me from the waves, I have been processing the affliction I faced in the maelstrom of mental illness. I encountered a form of suffering involving exhaustion, turmoil, and blindness, yet through this I grew to know the abundant comfort of Jesus. It has been essential to draw on this comfort in times of affliction for myself and those around me. Trusting in his active presence amid struggle, I am encouraged and equipped to continue discerning how to receive and provide comfort as I voyage along the course set before me.

Less recognizable since cutting his mane of hair, Cam can be spotted in his neighbourhood of East Vancouver or downtown where he works. Cam often escapes into the outdoors to chase mountaineering, skiing, and climbing objectives. In 2019, Cam realized his hair was getting kind of long resulting in a campaign to raise awareness and funds for a local mental health resource centre. Post-chop, Cam considers himself a growing mental health advocate with a desire to deeply engage with those around him on topics involving faith and mental health.