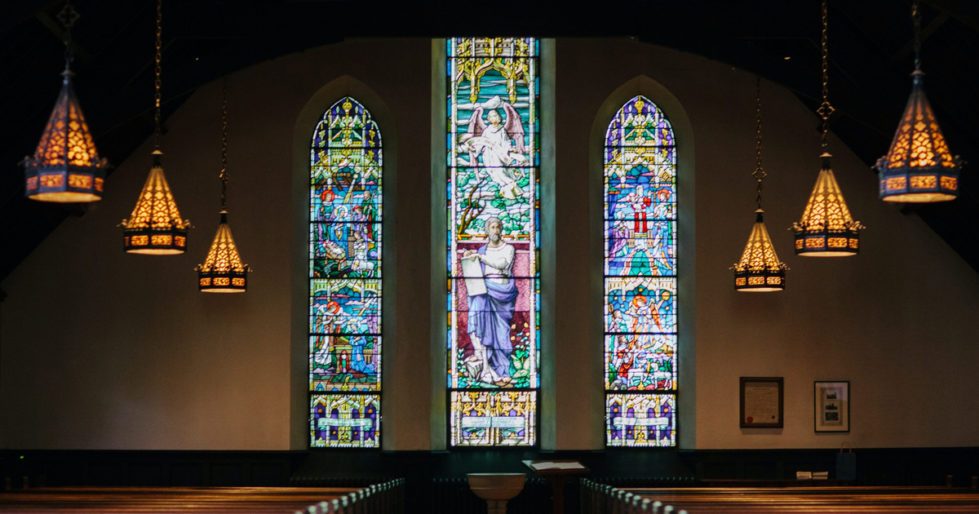 Is it ok to lie in your mind?

This was the only version of the question that my childhood self could scribble on a notepad for my parents to read. They had no idea why this seemingly incomprehensible question had their six year-old tied up in knots and why she couldn’t say it out loud. It was a painful episode for all of us.

I understand now what my younger self was trying to figure out: what are the consequences of thinking something that is untrue? Is it the same as lying, even if the thought was never spoken or acted upon? I knew that telling lies was a serious, punishable, sin. Is that what I had done? This question imprisoned me in overwhelming terror and guilt. The only way to lay these questions to rest was to check, but checking itself was scary because it might confirm my worst fears of being bad.

I now know that this kind of obsessive thinking has a name: scrupulosity. It’s a religious form of OCD that psychotherapist Laurie Krauth says has also been called “irrational moral perfectionism.” In her description, people who live with scrupulosity

have persistent, irrational, unwanted beliefs and thoughts about not being devout or moral enough, despite all evidence to the contrary. They believe that they have or will sin, disappoint God, or be punished for failing…. They blame themselves for falling short of impossibly high standards. They are tortured by the intensity of their doubts about their goodness, and the belief that, therefore, they are downright bad.[1]

Common compulsions of scrupulosity include checking behaviours, excessive confession/prayer, frequently asking for reassurance, repetition of religious texts/statements, making pacts with God, avoiding religious spaces, etc. In a recent interview with Sanctuary ambassador Dr. Hillary McBride, Catholic musician Audrey Assad shared that she managed her scrupulosity by compulsively repeating the sinner’s prayer until she could do it with the “right” amount of sincerity. I recognized that compulsion in myself.

My scrupulosity flared when I was in university. It started with a theological question: what do we mean when we say that Jesus died for our sins? This question led me to consider the penal substitution theory of atonement[2] that I’d been taught and readily believed growing up. The more I probed, the less it made sense and the floodgates opened: if Christianity is all about trusting Jesus’s ability to save, but I can’t trust the explanation of penal substitution, what do I do? God can’t save someone who doesn’t trust him so I’ve damned myself. I’ve cut myself off from God. Even if he wanted to, God couldn’t save me because even God can’t break the rules. I’m going to hell. I tried to manage these thoughts by reading books, asking pastors, and imploring God but nothing could ease the storm and no one seemed to understand why I was so overwhelmed by what was, to them, an esoteric theological abstraction. One night the thought I’m going to hell started swirling around and around in my head until I went into what I now know to be a full-blown panic attack.

In my mid-twenties I started seeing a wonderful therapist who gave me language for and tools to manage the anxiety and scrupulosity that controlled so much of my life. In my late twenties, I started taking medication to complement the work I was doing in therapy. While the combination of therapy and medication does not make me immune to obsessive, intrusive, anxious thoughts, it has reduced the severity of my symptoms and helps me to better manage them when they come.

Kasey’s story is featured in Session Two of The Sanctuary Course for Catholics. Learn more about the course here, or access it on Formed.

When I entered the Catholic Church in November 2018, I was faced with the obligation to start going to confession,[3] and I could feel the familiar surge of scrupulous thoughts: what if my examination of conscience[4] was imperfect? How could I be sure I was in a state of grace before receiving the Eucharist? What if I committed a sin on Saturday night and couldn’t go to confession before Mass the next morning? How could I know if I was truly repentant? Despite my fears, I’m pleased to say that my time in the confessional over the last two years has not fed my mental illness or undone all the hard work of therapy as I feared it would. I know this isn’t true for everyone, but I’m hopeful that understanding mental illnesses like OCD can help sacramental confession contribute to everyone’s flourishing.

One of the particular difficulties of doing an examination of conscience when you live with scrupulosity is doing a moral assessment of one’s thoughts, intentions, and impulses. Jesus teaches that these aspects of our inner lives are not morally neutral. At the same time, we know that our brains offer us a lot of material that we do not invite, desire, or affirm. It can be intellectually, emotionally, and psychologically straining to parse out our responsibility. When doing an examination of conscience, I am often worried that I haven’t done it perfectly. Maybe there are things that I’ve missed, refused to see, lied to myself about, or minimized. The compulsion to examine my conscience repeatedly with different guides (a quick internet search will show you how many are out there!) can be hard to resist.

A conscious intervention I’ve implemented as I prepare for confession is to pray that I would hear the gentle voice of Jesus distinct from my own critical, condemning voice. I ask that I would be guided by him to the truth about myself. For scrupulosity sufferers, this truth is often that we are not “bad” in the ways that we think we are, but that our obsessive pursuit of a certain kind of perfection has led us to become so turned inwards that we have failed to love—the true measure of Christian perfection. I’ve also decided that weekly confession is not going to be a part of my life as a Catholic because I don’t want examination of conscience and confession to become, themselves, compulsions to manage scrupulosity. Although it may feel like Good Friday to me on many days, this is not the deepest truth of reality. There is a time for fasting, contrition, and deep, hard repentance but there is also time for feasting, thanksgiving, and rejoicing because God has decisively conquered sin and death on our behalf.

When I persuade myself to stop examining my conscience and get into the confessional to start talking, I often tell the priest that I’m a new Catholic, new to confession, and that I struggle with scrupulosity. This enables me to voice my questions and uncertainties: is a or b truly a sin? How serious is it? How culpable am I? What if I don’t feel very guilty about it? The priests I’ve met in the confessional have answered my questions calmly, honestly, and compassionately. They haven’t treated my sins with any more—or any less—seriousness than they deserve. They know that the answer to scrupulosity is truth and mercy, not a false declaration of innocence. One of my hopes for our church is that all of us (clergy and laity alike) would react to scrupulosity with such thoughtful care.

Voicing my sins and scrupulous thought-patterns out loud (and, in some places, face-to-face!) to a priest is uncomfortable, but I have found it to be immensely healing. As Brené Brown often proclaims, exposure can be strong medicine for overwhelming feelings of shame and self-condemnation. I have found that confession helps me cultivate what Laurie Krauth calls my “wise mind,” the part of me that knows my obsessive thoughts are a symptom of a mental illness, not a reflection of the truth. When my scrupulous voice reminds me (at 3:00 AM, inevitably) of all my past sins and imperfections, real and imagined, my wise mind can reach for the truth that Jesus Christ, in the person of his priest, has spoken over me. I may be guilty, but I bear it no more. This is much better news than the temporary solace that compulsions offer.

Scrupulosity can make it hard to trust my priest’s ability to weigh what I’ve confessed to him, his assessment of what my penance should be, and his pronouncement of absolution. Still, with the help of age, medication, and therapy, I have some peace with the reality that even my confessions will be imperfect, especially as I learn the rhythm of this sacrament. I always feel lighter when I emerge from the confessional, but it is not, for me, a substitute for taking my medication or going to therapy. I am grateful to be in a church where confession is, at least in principle, a normal part of life. It is a regular reminder that all of us, whether we live with the complexities of mental illness or not, need a place where we can speak the messy, confusing, and sometimes dark truths about ourselves, and be embraced with mercy.

[1] Laurie Krauth, “Scrupulosity: Blackmailed by OCD in the Name of God,” http://www.lauriekrauth.com/scrupulosity-blackmailed-by-ocd-in-the-name-of-god. Accessed 5 Jan. 2020. [2] This theory posits that because of sin, human beings are subject to the wrath of God and deserve death. On the cross the innocent Jesus suffers this punishment in humanity’s place, as their substitute. Having poured out his righteous anger against sin on Jesus, God cannot justly pour it out on humanity. [3] In the Catholic Church, you must confess your serious sins to a priest before you can receive the Eucharist. Like all Christians, Catholics believe that only God can forgive sins, but we also believe that as God’s representatives, priests have the authority to forgive sins (John 20:23 is one main source of this belief). Confession is also called the sacrament of Reconciliation because in acknowledging our sinfulness and receiving forgiveness, we are brought back into communion with God and the Church. You can read more about it here. I also really like this video about confession from the perspective of a priest. [4] As one Catholic website puts it, “an examination of conscience is the act of looking prayerfully into our hearts to ask how we have hurt our relationships with God and other people through our thoughts, words, and actions.” Guides are frequently based on the Ten Commandments, the Beatitudes, or the Seven ‘deadly’ sins.

Kasey Kimball received her MA in Theology at Regent College (Vancouver, BC) in 2018. She is now a 2nd year PhD student in historical theology at another BC: Boston College. When she’s not in the library, she enjoys British detective fiction, running, teatime, and making dog friends. She considers it part of her mission as a young Catholic theologian to speak openly about her mental health journey so that others can too. If you are curious about her academic writing, check out her Academia.edu page; if you want to know more about her conversion to Catholicism, start here.