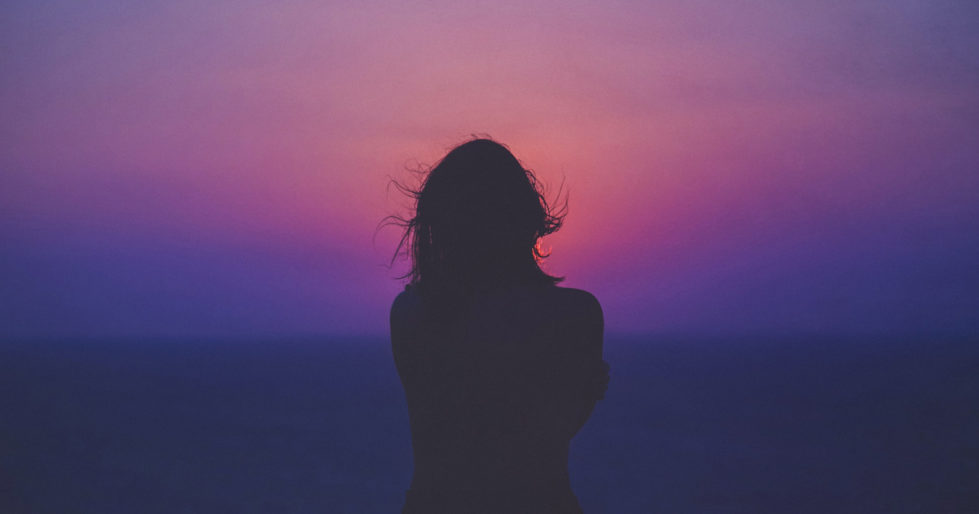 I have a strangely vivid memory of getting sick with strep throat when I was in seventh grade. My sister, who was then a junior in high school, was babysitting my two younger brothers and me. It was the kind of New England cold that is particular to being on the coast: the wind is saltier, the air crisper, the houses old enough that the slightly salted air bleeds in through the thin glass of the windows and the tiny cracks by the doors. I wasn’t feeling well, I remember, but pushing through some homework while sitting on my bed. At some point I told my sister that my throat hurt, and she put her hands on my face. They felt delightfully cold—the cold of clean water on your face first thing in the morning, or the deep drink after running around outside chasing children.

She looked at me, real worry etching around her eyes. “You’re really warm, Hil.” I think I fell asleep, my mother took me to the doctor the next day, we came home with amoxycillin, and when the fever broke, in that strangely good sweating way that they do, I carried on with my life.

I do not know why this memory is so vivid, but when I think about health I think about this story. The foreign invasion, the strep throat that creeps in and makes an unwanted home. Until the fall of 2016, this is what I thought it meant to need medicine, to be either healthy or sick. Simple and straightforward. If you are sick, it means something is in you that does not belong. You become better by getting that other thing out.

If I’m truly honest, this was a bit of how I thought about depression and anxiety. I thought that depression meant you were in bed with aches and pains, or having a heart attack of anxiety, or that the medicines prescribed were for making you better and taking the depression away.

And then I encountered my own postpartum depression.

At first, I really thought I was “sick” with a cold; I was looking for a fever. I wanted to explain the strange heaviness in my limbs with bacteria I’d caught from the clinics and hospital waiting rooms we visited with my one-year-old son. I wanted something that was foreign to me so that I could solve it by getting it out of me.

But depression is not “outside” of my body, it is not a bacterium that has invaded, it is not a virus furiously replicating in my cells. It is circuitry gone amiss, or serotonin gone missing. It is chemistry and somehow more than chemistry. It is all the thoughts and patterns of thoughts, years of thoughts – my thoughts! – tumbling around and getting taken up or written in Sharpie over every conversation and interaction. How can I explain it? Was this me, this sadness edging the corner of my smile? Or this absence of feeling, a gray fog I entered like a sleeping traveller, willing to keep walking but unmotivated by destination or beauty or hope?

Was it me, this feeling of tremendous, overwhelming fear for all the things that could happen to my baby or all the things I couldn’t give him—and then later, her, and then, her again? With all three of my kids, I have had this experience of coming to see, as if out of the corner of my eye, a recognizable and familiar thing. This is depression, but it is not a foreigner.

There is a lot of uncertainty for me in describing my own experience here. I do not want to say I am sick or unwell. In part this is because I am wary of the way those words take shape in our imaginations and so often overwhelm our ability to be observant about the world. We hear that someone is sick and make all kinds of assumptions about how their life is going. People hear that my son is disabled and assume immediately that he is a special angel from heaven sent for my own benefit or that I am a superhero. But we’re neither of these things. And I don’t think depression is always experienced like sickness or that it always or necessarily makes a life worse when the fullness of that life is seen in its prismatic, wild totality.

My philosophy demands that I make more room to be surprised at how our bodies might shape our lives.

So here are some ways that my body—and depression—has shaped me: I have had to spend time naming things I feel. I have walked circles around my worries trying to know their roots. I have dug up things inside me that have been there for so long I cannot tell you where they came from. I have done EMDR (eye movement desensitization and reprocessing). I have taken antidepressants faithfully (and then weaned off, and gone back on, and am still dancing with that). I don’t do these things because I think they will rid me of depression. I do these things because I think by doing them I befriend my depression, and in befriending it I will make my way forward.

Is this so different from befriending the children who shaped my body in all its physicality, six and four and two years ago? Those wondrous strangers who carved lines in my stomach, and shared my blood, and whose cells still linger in me—they, too, are companions I am coming to know and cherish. They, too, shape how my life flourishes, how my hope takes flight. The depression that danced in behind their births is not an infection, but a new dimension, a new space in which I meet myself.

Perhaps it could also be said this way: my depression is a part of me, but not the whole of me. And it is greedy to be the whole of me. It is greedy to make its thoughts and suggestions louder and louder, until it drowns the music playing elsewhere in my brain. It is a river running through my experiences of parenting and graduate school, of discernment, of God; but it wants to be the only thing that shapes the landscape, as if the rest of my being were merely sand that melted and molded to the shape the river took.

But a river is just as shaped by its surrounding grasslands, by the plants on its banks, by the birds that fish in its water and the fish that dart in and out with the sun flickering off their scales in a dance with the air and the light. The river is part of the landscape, but the landscape is bigger.

Last night my middle daughter, with whom my postpartum depression was perhaps the strongest, crept out of her bed and asked to sit with me and my husband on the couch as we finished our TV show. I was lying down, and she put her body on top of my chest the way I remember holding her as she slept at one, two, three-weeks-old. I stroked her curls and marvelled at the way she has grown. Yet I can still feel the smallness of her, the weight of her tiny, budding, life in my hands. In this moment, the time between then and now vanishes: the river of the depression of her first few weeks bleeds into the wonder of her full four years. I am standing in the water, and the landscape is beautiful.

Hilary Yancey is a philosopher, writer and bookseller living in Waco, TX. She focused her dissertation on questions related to human beings, body parts, and medical ethics; she loves to read all kinds of fiction; she wrote a memoir called Forgiving God about her experience of her first pregnancy, her son’s disabilities, and her wrestling with God. In her spare time you can find her with a nose in a book or chasing her three kids across a playground. 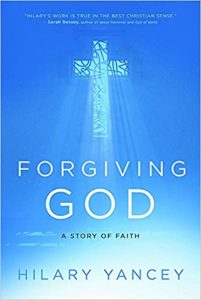